WHAT TO WATCH ON TV 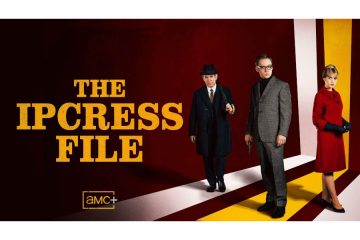 Speaking of Len Deighton, he is quite a character. After completing his national service in the RAF, he attended art school in London and graduated from the Royal College of Art in 1955. He had several jobs before becoming a book and magazine illustrator. He worked for awhile in an ad agency. During an extended holiday in France he wrote his first novel, The IPCRESS File, which was published in 1962. He has said he likes telling pretty girls that he’s a writer more than writing.

Between 1962 and 1966 Deighton was the food correspondent for The Observer and drew “cookstrips”—black and white graphic recipes like comic strips. A selection of these were collected and published in 1965 as Len Deighton’s Action Cook Book, the first of five cookbooks he wrote. Other topics of his non-fiction included history, particularly military history.

Deighton’s first novel was turned into a fine movie (check it out here; it’s not currently streaming) starring Michael Caine as the unnamed first-person narrator, who in this and a series of films based on his books, and our 2022 miniseries, is called “Harry Palmer.” (Midnight in St. Petersburg and Bullet to Beijing are not canonical, but “based on characters by Len Deighton.”)

He’s a cheeky spy who The Times of London called “the epitome of Sixties cool.” A trailer for Caine’s second role as Palmer described him as possessing “horn rims, cockney wit and an iron fist.”

James Watkins, director of this TV adaptation, said that Harry was a literary response to Ian Fleming’s insanely popular James Bond. The IPCRESS File novel was published shortly after the cinema release of Dr. No, the first installment in the James Bond film franchise. Deighton’s hero was quickly identified by critics and fans as being the anti-Bond. “Bond is a superhero,” Watkins told BBC Culture. “He kills without thinking or caring. He is establishment. He went to Eton. He uses his fists and his weapons more than his brain; gadgets, rather than real life.

“Harry is near-sighted. Working class. Haunted by killing in Korea. A reluctant spy. Blackmailed into working for the establishment, insolent Harry is a constant thorn in their side. Trying to make his way in a world that is stacked against him. Always facing a class barrier. He’s so much more relatable than the dinosaur Bond.”

In this 2022 miniseries, Palmer is played by Joe Cole (Peaky Blinders), quietly droll in a way that reflects Deighton’s original character. Unlike Game, Set and Match’s Bernard Samson, he’s quiet but cheerful. He dresses conservatively and wears glasses similar to the distinctive and famous horn-rims that Michael Caine wore in the 1965 movie version. (The original glasses worn by Caine went on sale at Christie’s, the London auction house in 2006. They were expected to fetch up to £3,000, or $4,088, and sold for £6,600, or $8,994.)

The basic plot is there, but it’s more about Harry (and that’s all I’ll say about that!) and there’s a twist added, one that I enjoyed. So fans of the book and the film should take the plunge and try it. In an homage to the film, we meet Harry the same way we did on the big screen: He awakens in his bed and looks about. A POV shot shows us what he sees—a blur, until he slips on those eyeglasses, when it comes into focus. He then sleepily but deliberately makes a pot of coffee, starting with grinding the beans. Many of the scenes are shot on an angle, off-kilter as it were, like the film, and Cole does resemble Caine slightly—although not enough to pull us out of the story; after a while we don’t think about it. Barbara Ellen, in The Observer, writes that Cole sneaks “into the role like a cat through a side window. It’s all in the cocky backchat, the crackles of masked intelligence, the wary glints; the acknowledgment that whatever else is going on in cold war Britain, for Palmer, surfing the class system is part of it.”

A nuclear scientist called Dawson is kidnapped. Harry, a British Army sergeant with a criminal past, now working for a Ministry of Defence organization, is summoned by his superior, Colonel Ross, and transferred to a section headed by Major Dalby, and co-opted into the dangerous mission to find Dawson.

The book was a worthy rejoinder to Ian Fleming’s Dr. No, and the film and TV series both worthy adaptations of the book. I love it.

How do you do the right thing—if you’re on the wrong side? 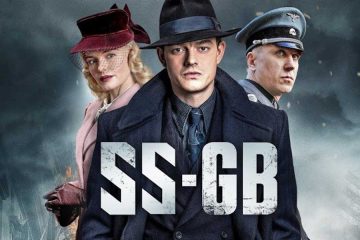 Deighton even took a swing and had a hit with speculative fiction. Reading Deighton’s 1978 SS-GB novel suggests that he enjoyed writing more than he admitted. The series, like the book, takes place in November 1941, nine months after a successful German invasion of Britain. Winston Churchill has been executed, and King George VI is a prisoner who has not been seen in public for some time. His queen, Elizabeth, and their daughters Elizabeth and Margaret have escaped. A British government in exile, led by Rear-Admiral Conolly, exists but is not recognized by the United States (remember, the USA only entered WWII in December 1941—a month hence). Germany has also maintained friendly relations with the Soviet Union, and Soviet Foreign Minister Molotov has just flown in to oversee the removal of the body of Karl Marx to the Soviet Union.

The complications of living under the Third Reich are illustrated when Archer’s young son asks, Do you work with the Gestapo, Dad?

“They work in the building nest door, but I don’t work with them,” Archer answers, ashamed of his situation after all. He’s shocked and appalled when his son replies, “Do you think you could get a Gestapo badge?”

Worse, he learns that his secretary and lover, Sylvia Manning, is involved with the British Resistance against the Nazis.

The tone is dark, even in the wide, incredible long shots of London draped in swastikas, and the drama is all Deighton. An exercise in ethics, it’s comparable only on the surface to The Man in the High Castle.

(Pete Hummers is a participant in the Amazon Services LLC Associates Program, an affiliate advertising program designed to earn fees by linking Amazon.com and affiliate sites. This adds nothing to Amazon’s prices.)

Click here for more Stream On: What to watch on TV columns by Pete Hummers

Dr. Oz’s failed run for Senate may have nuked his TV career

Chris Orzechowski is a freelance copywriter who turned his side hustle into a business in 2017. He learned skills through online coaching and courses, books, and blogs. He...

Dr. Oz’s failed run for Senate may have nuked his TV career

Remarkable for his snake oil sales and experimenting on dogs, Dr. Mehmet Oz is having difficulty finding a path back to mainstream television. Having run as a hard-line...

When you poke around inside your closet, do you feel like you're overwhelmed with tons of old clothing that you don't envision yourself wearing ever again? If so,...

Just in time for the holidays—which for many folks will include ordering mounds of gifts from online sellers—here's an informative and disturbing podcast about worker safety (or lack...

Most businesses are in the process of tuning their strategies for the new world of organizations and hence certain job roles in marketing, engineering, wellness, among other fields...