Most Contorted Job Market Ever Struggling to Revert to Normalcy?


Last jobs report before next Fed meeting. Not giving the Fed any material for second thoughts about ratcheting up its rates.

By Wolf Richter for WOLF STREET.

Employers added 263,000 workers to their payrolls in September, according to surveys of employers by the Bureau of Labor Statistics released today. Over the past three months, employers added 1.12 million workers.

This rolling three-month pace of adding W-2-type jobs, which has been in the same range since April, remains well above the range before the pandemic – despite a labor force that dipped in September and refuses to go back to pre-pandemic trend, and despite a labor-force participation rate that remains desperately low. 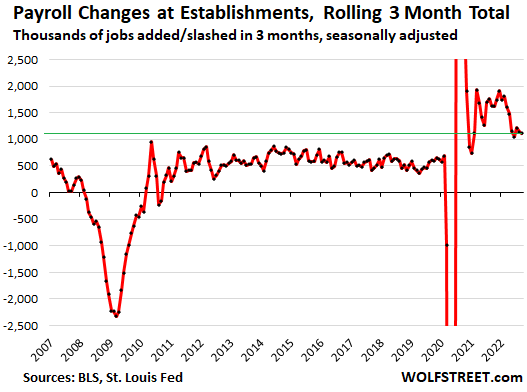 But who are employers hiring? What we can see in the data is that employers in aggregate brought self-employed people onto their payrolls by offering higher pay, improved working conditions, better benefits, or the option of working from home.

And so the net gain in jobs of all types, including the self-employed, was much smaller, actually fell earlier this year, for part of the year was below pre-pandemic trend, and has only now risen to pre-pandemic trend.

That’s what the BLS survey of households tells us, also released today. It includes all types of workers, from W-2 employees to the self-employed and people who started a business.

The total number of workers of all types rose by 204,000 in September, and by 825,000 over the past three months, which was a big improvement of earlier this year: In April and June, the number of workers had actually dropped by over 300,000 each month. 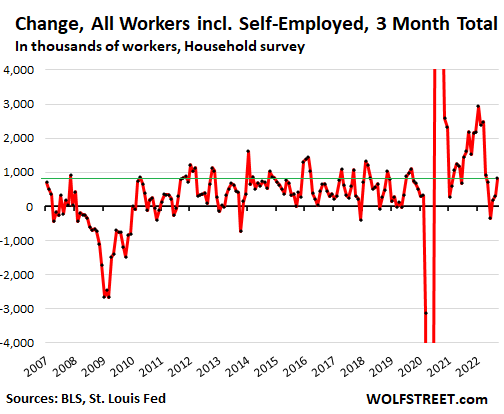 The total number of workers of all types in September, at 158.9 million, increased over the past six months by only 478,000 with the dips in April and June, and with the stronger gains of 825,000 workers over the past three months: 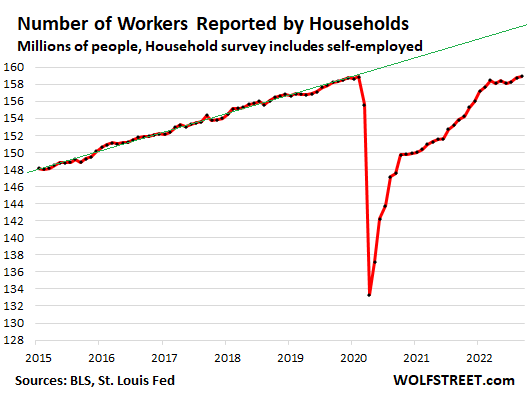 The labor force… nope, not yet.

The labor force – people who either have jobs or are actively looking for jobs – is far from having fully recovered from the hit it took during the pandemic. There are lots of reasons for this phenomenon. But for whatever reasons, lots of people have left the labor force and haven’t come back; and many older workers, especially in tech, who want to come back are locked out by age discrimination; and new entrants into the labor force are too slow to overcome the gap.

The labor force dipped again in September, after a big jump in August, to 164.7 million, and remains stunningly far below pre-pandemic trend. This is the single-biggest and very complex issue that the labor market has – bringing people back into the labor force: 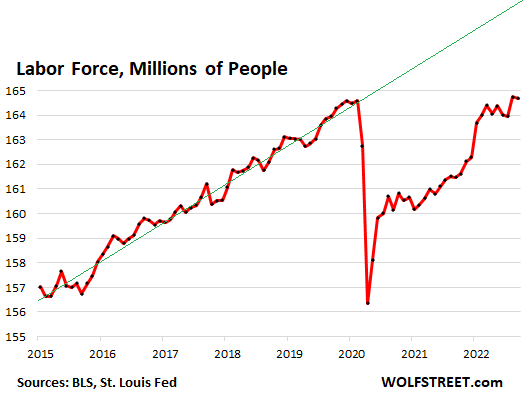 The labor force participation rate, which measures the labor force as a percent of the working-age population 16 years and older, really hasn’t recovered at all this year. In September, it dipped to 62.3%, same as in February: 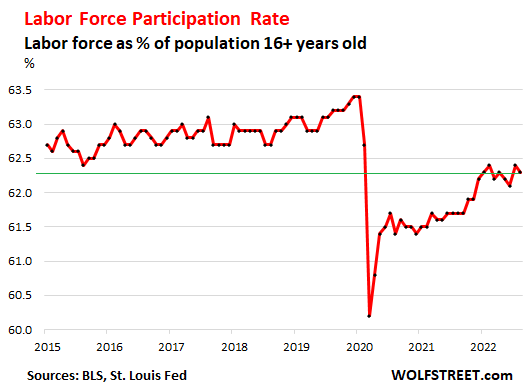 The prime-age labor force participation rate – people between 25 and 54 years old, the most crucial portion of the labor force — excludes whatever impact boomers have on the labor force. It has fully recovered to the Good Times range. In 2019, it averaged 82.5%. In September, it dipped to 82.7%.

But to give us something intractable to ponder, here is the long-term chart: 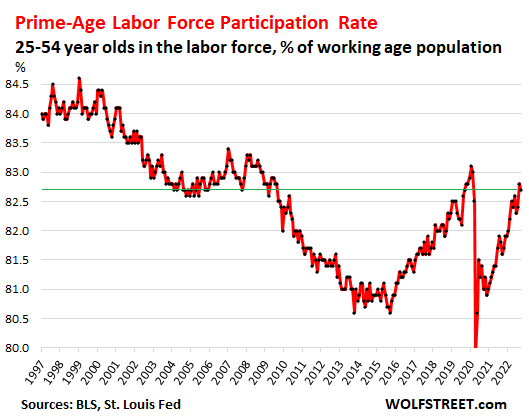 The hourly earnings of regular workers – excluding executives, managers, and other supervisors – rose by 0.4% in September from August, same as in the prior month, but not as hot as last year’s increases. The range of nonsupervisory workers in this category spans the private-sector spectrum – coder, electrician, janitor, drywall specialist, barista, architect, lawyer, factory worker….

Compared to September last year, this measure of hourly earnings increased by 5.8%, the smallest increase in 13 months, and down from the 6.7% range in February and March.

That may remove some fuel from inflation, but it’s a really bad deal for the workers, and for the economy, when price increases out-run wage increases. 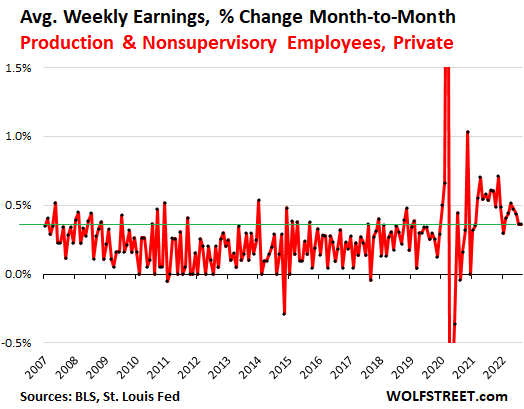 Still the most contorted labor market ever.

The labor market over the past two years has been an amazing creature to watch. There are so many factors that changed during the pandemic that the labor market essentially got scrambled. And it is now trying to sort itself out.

For reasons related to the labor force, meaning supply of labor, this is still a hot labor market, with employers (demand for labor) struggling to hire people, and struggling to retain people, even as some of the money-losing crazy startups have begun the process of toppling and shedding people. But most of those people are then quickly absorbed by other companies.

This was the last jobs report before the Fed’s meeting on November 1 and 2, and there is nothing in this data that would give the Fed second thoughts about ratcheting up its rates. And the markets are figuring this out too, it seems.

Enjoy reading WOLF STREET and want to support it? Using ad blockers – I totally get why – but want to support the site? You can donate. I appreciate it immensely. Click on the beer and iced-tea mug to find out how:

Would you like to be notified via email when WOLF STREET publishes a new article? Sign up here.

Most indices remained optimistic on Thursday and ended in the green. Tokyo and Hong Kong made decent gains, but China dragged due to the worsening Covid situation. Europe...

The Escalating Shortage of Warehouse Space in the Beverage Industry

Container ships lined up for miles at American ports might be the most iconic supply chain image to emerge from the pandemic, but another issue plaguing beverage alcohol...